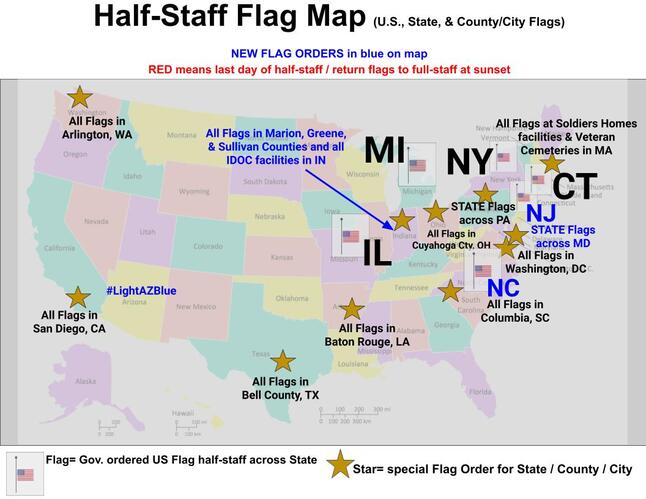 [  Example of Flag Steward's daily Flag Status map  ]
... In April 2020, due to the COVID-19 pandemic, this was the most half-staff orders on 1 day (17 Half-Staffs across the USA) - the most we've seen since this project started in 2016 ...
​... In addition to delivering Half-Staff Alerts, Flag Steward also relays Daily US History Reminders, Civics Lessons, Noteworthy Quotes, and some Fun from Our Flag - all with goal of making the Pledge more Engaging & Meaningful for Students
[ GO HERE to see 60-day case study about the accuracy and completeness of Half-Staff Alert sites & apps ]
Flag Steward:
Mission:  To Build Better (more Informed, Inspired, Respectful) Student-Citizens

[ Platinum is GuideStar's highest rating of a nonprofit's profile. Review Beacon of Honor's profile (aka Flag Steward) on Guidestar at: https://www.guidestar.org/profile/46-2457373 ]
... in the News / Media ...
Memorial Day 2019:
An unexpected surprise...
At about 2:30pm on Memorial Day, while I was up in a remote area, near Sugarloaf Mountain, in the Boulder Canyon, I received a text message from Tom Mustin of Denver's ABC Channel 7 News.  He wanted to interview me about Flag Steward and its iHonor Flag program for the Ch. 7 News broadcast at 10pm.  I scrambled down from Boulder Canyon and met Tom at the studio around 5:30pm.  The resulting news interview is below...
​November 2018:
Flag Steward's 'Interactive American Flag,' honoring a GWOT fallen CU alum, made this US Flag carried on the field by CU's football team more meaningful to the team and its fans

The flag we carry out behind Ralphie this week will be a little more special.

This week's featured INTERACTIVE AMERICAN FLAG, honoring the 1st of 4 GWOT fallen CU - ROTC alums, was given to the CU Football team to lead the team out behind Ralphie for this Saturday's (11/10) Military Appreciation Game
[See CU Football's Tweet about this event below]