​[ Note:  This script and subsequent video is a demonstration of how the Flag Steward nonprofit's Pre-Pledge Tribute can be performed by local (metro Denver) H.S. students to brighten the spirits of our pandemic-frustrated students within the Denver area and potentially across America.  It is intended to motivate students to keep working hard in school and for each other, so we can come out of this as a stronger nation and set of communities.  It's a preview performance of the Pre-Pledge Tribute for Friday, September 11th - recapping the week of September 7-13. ]
[ Note2:  ​Do not read aloud any text with [ brackets ] around it.  ONLY READ THE TEXT IN BLUE. ]
[ SPEAKER 1 - read blue text only]​​​

Gooooooooood day, students across metro Denver and America learning at home or school.
​This is Sean Sweeney, Founder of the Flag Steward nonprofit project, kicking-off this week's Pre-Pledge Tribute along with special guests Kate Roscoe, Amaya Green, and Zach Lemon.
Over the years, sadly, the Pledge has become a boring, meaningless task for many students and is recited less and less at schools each year.  Why? Because it's not engaging, interesting, or motivating to most students.  So, we're here to change that by having students perform a short, purposeful ceremony once-a-week before the Pledge.  The weekly tribute is intended to inform and inspire students by relaying today's flag status, a story from Our Flag, and fallen patriots to honor.
...
[ pause ]

​Kate Roscoe, who four years ago, as a 6th grader, was one of the founding students of the Pre-Pledge Tribute program, is going to get tell us today's Flag status.
[ Speaker 2 - read blue text only ]

Hi, I'm Kate Roscoe, a Junior at Mountain Vista High School in Highlands Ranch, Colorado.  And, I'm here to share with you ...

Where is Our Flag lowered to half-staff today, Friday, September 11th? 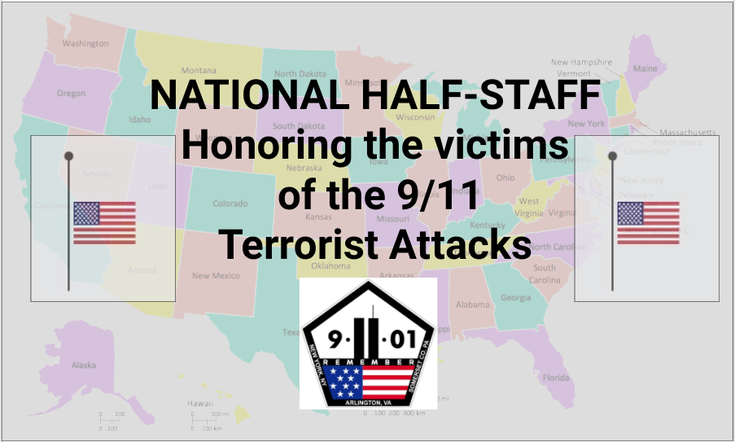 [ Speaker 2 - read blue text only]
Our Flag, the U.S. Flag, is at HALF-STAFF across the USA and its territories in observance of Patriot Day - a national day of mourning for the 2,977 people killed during the September 11th terrorist attacks in 2001.  Of the 2.977 people killed by these horrible acts, that's about the same as the number of students attending Cherry Creek School District's Eaglecrest High School, 246 were aboard the four planes that crashed, 2,606 were in or near the World Trade Center, and 125 were working at the Pentagon. 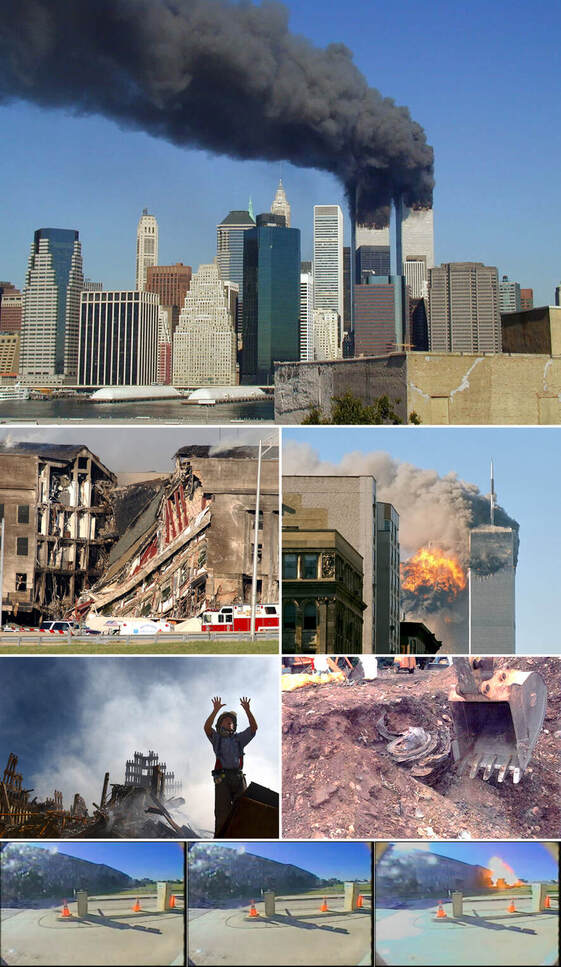 [ 9-11 terrorist attacks photo montage from Wikipedia ]
​Please, take a moment to remember these 9/11 victims and their family and friends still missing them.

Hi, I'm Amaya Green and I'm a Sophomore at Cherokee Trail High School within the Cherry Creek School District.
I'm here to tell you about ...

​THIS WEEK'S STORY FROM OUR FLAG:
It's a story of unity - from then and now. 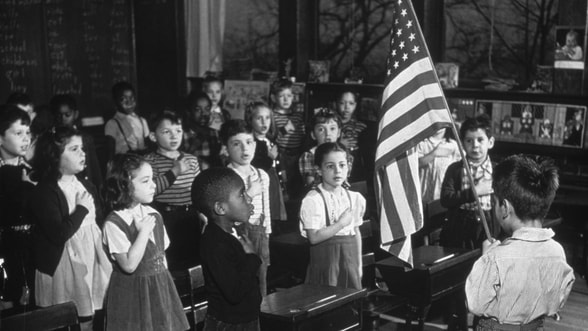 [ 1950s classroom - fair / educational use ]
128 years ago this week, on September 8th of 1892, the Pledge of Allegiance was first published.  It was written to inspire patriotism and unity among school children as part of the national celebration for the 400th anniversary of Columbus discovering America.  Over the years, the Pledge has become the poem that all generations of Americans can gather for and recite together. 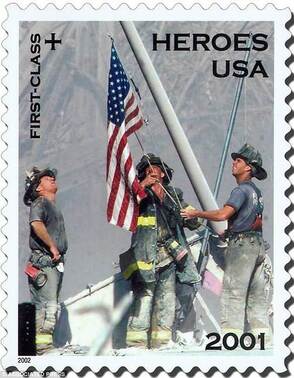 [ photo by Thomas E. Franklin of the flag-raising at Ground Zero - fair / educational use ]
Similarly, on this date 19 years ago, September 11th of 2001, the horrors of the terrorist attacks on the World Trade Center and Pentagon, inspired not a poem, but rather, a famous act of patriotism and hope.  The flag-raising at Ground Zero by three firefighters became a symbol and statement that in America - "United We Stand."  United we stand to defend our freedoms and serve justice against acts of terrorism.
​And, so, today, as we battle pandemic isolation at home and social injustices and inequality in our communities, we need to unite and overcome these obstacles by fulfilling our 128-year old promise to each other - to be a nation that is truly "indivisible, with liberty and justice for all."
[ Speaker 3 - read blue text only]

And, now, I'm going to turn it over to Zach Lemon, a fellow Cherry Creek School District high schooler.
[ Speaker 4 - read blue text only]
Hello, this is Zach Lemon, a Sophomore at GrandView High School in Aurora, Colorado, and ...
... I'm here to inform you of ... 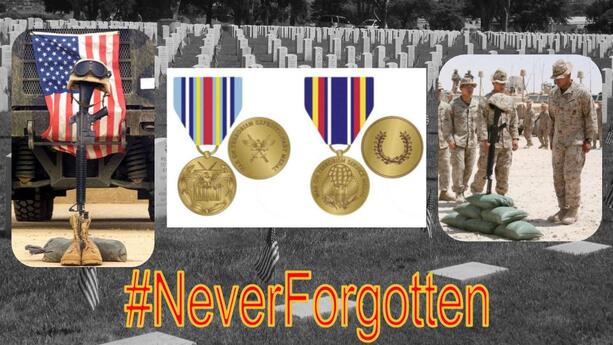 [ Battlefield Cross images and Global War on Terror Expeditionary and Service Medals (left and right) - public domain images ]
After the 9/11 terrorist attacks, our Nation declared a "Global War on Terror."  Unfortunately, most students don't know that 19 years later, we still have troops overseas fighting that war.  And, so far, after 19 years of fighting against terrorism in Iraq, Afghanistan, and other places, 7,052 soldiers, sailors, airmen, and Marines have been killed while conducting "Global War on Terror" operations.
​
We honor the sacrifice they made while protecting our freedoms and fighting to liberate the lives of others. 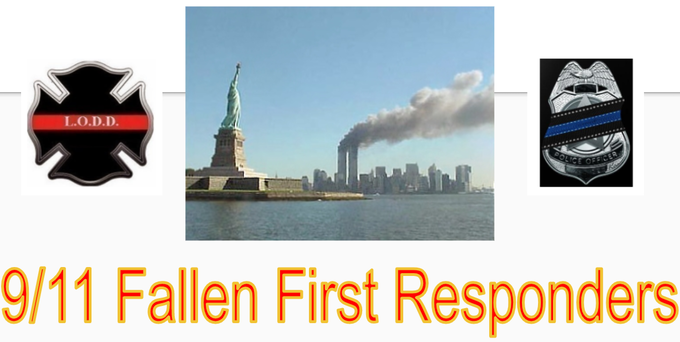 [ Burning Twin Towers on 9/11/2001 - public domain image ]
And, back on the homefront ...
... let us not forget the the 412 First Responders who died 19 years ago today trying to save citizens in and around the burning World Trade Center.  Those killed in the line of duty on 9/11/2001 included:
343 firefighters of the New York Fire Department
61 police officers
and 8 EMTs (Emergency Medical Technicians)

We honor and thank these first responders for their fearless efforts to save the lives of others that day.
[ Speaker 5 - read blue text only]

And, now it's time to ...
Recite the Pledge of Allegiance
Students across metro Denver and America, at school or at home, empowered with inspiring stories from Our Flag, you can now recite the Pledge more meaningfully. ;)
​
​Please, unite and say together:  ​
​"I pledge allegiance to the Flag of the United States of America, and to the Republic for which it stands, one Nation under God, indivisible, with liberty and justice for all." 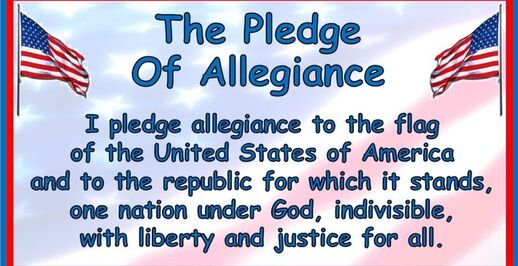