In the sections below, there are / will be Flag ceremony scripts you can use for special school, scout, and community events.
Ceremony for Historic Flags of the United States of America
[This script below was provided by D. Lemon, a Scout leader, for use at any Flag event.]
​
Master of Ceremony (reads the script provided below):
Our national flag has changed over the years.  This historical flag ceremony illustrates some of the more recognizable flags that our nation has used for over 250 years.   Each of these flags has served as our nation’s flag.  With the exception of the first two, we will salute each of these flags as our national flag.  Will the audience please rise for the presentation of the colors?
[Pause for audience to rise]
When instructed, those in uniform should salute, and those who are not in uniform please put your hand over your heart.  Honorably discharged veterans of the U.S. Military may also salute if not in uniform.

​In 1707, Queen Anne adopted a new flag for the British Empire - the Union Jack on a field of red. Called the British Red Ensign, this flag flew over the 13 American Colonies on the eve of the Revolutionary war.  British Commanding General Cornwallis surrendered to George Washington under this flag at Yorktown in 1781.​
​ 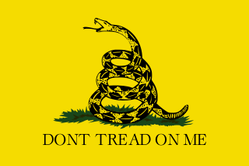 ​Named after Colonel Christopher Gadsden of South Carolina, this flag was first flown in early 1776 by the first Commander-in-Chief of the Continental Navy. Its inscription "Don't Tread On Me" represented a warning from the colonists to the British.
At the time, the rattlesnake was considered a symbol of the new nation.  Notice that there are 13 rattles representing the colonies.  The rattlesnake is only found in America and it has sharp unblinking eyes.  It always warns before attacking.  The rattlesnake never begins the attack, never surrenders, and its weapons are hidden until used.  The rattlesnake symbolizes vigilance, nobility, fairness, and true courage.
​

​Also known as the Cambridge Flag or Continental Colors, the Grand Union flag was the first national flag of the United States. It incorporated the British Union Jack with 13 stripes representing the colonies since they had not yet formally declared independence from Britain.  General George Washington raised it in 1775 to celebrate the official status of the newly formed Continental Army.

The Bennington Flag honors the year the Declaration of Independence was signed, with the number ‘76’ on the blue union, surrounded by less commonly used six-pointed stars.  Another unique feature of the Bennington Flag is the arrangement of the 13 stripes alternating white-red instead of the traditional red-white.  This flag is believed to have been the first Stars and Stripes used by American revolutionary land troops.  It was flown during the battle of Bennington, Vermont on August 16, 1777 when General John Stark’s militia led the Americans to victory over the British raiding force.

​According to legend, General George Washington commissioned Betsy Ross, a Philadelphia seamstress, to design a national flag.  It was adopted by Congress on June 14, 1777 stating: “That the flag of the thirteen United States be thirteen stripes, alternate red and white; that the union be thirteen stars, white in a blue field, representing a new constellation.”
Flag Day is celebrated each year on June 14 to commemorate this historic occasion. 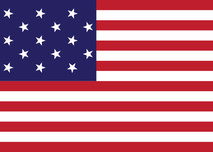 When Vermont and Kentucky joined the Union, a flag consisting of 15 stars and 15 stripes was created.  During the War of 1812, this large Star Spangled Banner, waving in majestic beauty over Fort McHenry during a British naval bombardment, inspired Francis Scott Key to compose the poem “The Star Spangled Banner”.  This poem was later set to music and in 1931 became our National Anthem.
Subsequently, when additional states join the union only stars are added to the flag because adding new stripes is too cumbersome.  After 1818, each flag has borne 13 alternating red and white stripes representing each of the original Colonies, and a star for each state is added on July 4th of that year.
This flag was used from 1795 until 1818.

When the Civil War began, President Abraham Lincoln refused to remove the stars representing the states that seceded from the Union.  This flag represented all states, even those attempting secession.  As the flag of the United States during the first half of the Civil War, the armies of the North flew this concentric-circle 34-star version of the Stars and Stripes during the conflict.  This was the flag in 1861 and remained the official flag of the United States until 1863 when West Virginia separated itself from Virginia to rejoin the Union.

48-Star Flag
​
On February 14, 1912, following admission of New Mexico and Arizona, President Taft approved a Joint Army-Navy report recommending that the 48 stars be arranged symmetrically in six rows of eight stars each.

The Executive Order on June 24, 1912 prescribed sizes and proportions of flags to be used by government departments. Prior to this date, 66 sizes, with varying proportions, had been used by governmental agencies.
This is the flag that liberated Europe from NAZI fascism in World War Two and put an end to Imperial Japanese tyranny in the Pacific.  It was hoisted over Iwo Jima by U.S. Marines on February 23, 1945 and became one of the most iconic photographs from the war.
This flag was used from 1912 until 1959, when Alaska, and then the following year, Hawaii joined the union.  Today’s flag of 50 stars has been the longest in use.
​
[ Scouts, Salute! Ready, Two! ]

Old Glory, 50-Star Flag
​
I am the flag of the United States of America. My name is Old Glory.
I fly atop the world's tallest buildings.

I stand watch in America's halls of justice.

I fly majestically over great institutions of learning.

I stand guard with the greatest military power in the world.

I stand for peace – honor – truth and justice. I stand for freedom. I am confident – I am resolved – I am proud.

When I am flown with my fellow banners, my head is a little higher – my colors a little truer.

I am recognized all over the world. I am respected – I am loved and I am feared!

I have fought in every battle of every war for more than 200 years. I was flown at Valley Forge, Gettysburg, San Juan Hill, the trenches of France, the beaches of Normandy, Germany, Japan, Korea, Vietnam, in the Persian Gulf and a score of other places ... I was there!

I led my soldiers, sailors, airmen and marines. I followed them and watched over them.

I was on a steep hill in Iwo Jima, I was dirty, battle worn and tired. But my servicemen cheered me! And I was proud!

I have been soiled, burned, torn and trampled on in the streets of countries I have helped set free, but it does not hurt – for at last, they are free!

I have flown over the rubble in New York City after an attack on America and the free world, but I shall overcome – for I am stronger than terrorists cowards and dictators.

I have been a silent witness to all of America's finest hours, but my finest hour comes when I am torn into strips to be used as bandages for my wounded comrades on the field of battle.

​When I fly at half-mast to honor my soldiers, my sailors, my airmen, my marines, firemen and policemen, and when I lie in the trembling arms of a grieving mother at the graveside of her fallen child.
America, I am proud to be your flag and your banner for freedom. My name is "Old Glory". Long may I wave.

[ Scouts, Salute! ]
Please, join us in reciting the Pledge of Allegiance
[ Ready, Two! ]
​
Thanks for participating in this special Flag ceremony reviewing the historic Flags of the United States of America.
Have a good day!

​And, if you have a script you'd like to be posted, please,
​email it to Staff@FlagSteward.org