​[ GO HERE to perform this week's Pre-Pledge Tribute at any time you like.  But, ... we recommend you designate each Friday as #FlagDayFriday
- a day to take 2 minutes to perform a pre-Pledge Tribute, which will make Pledge of Allegiance more engaging and meaningful. ]
Today's Flag Status
Our Flag flies at full staff across the USA, except in Maine, Massachusetts, and a part of Missouri. 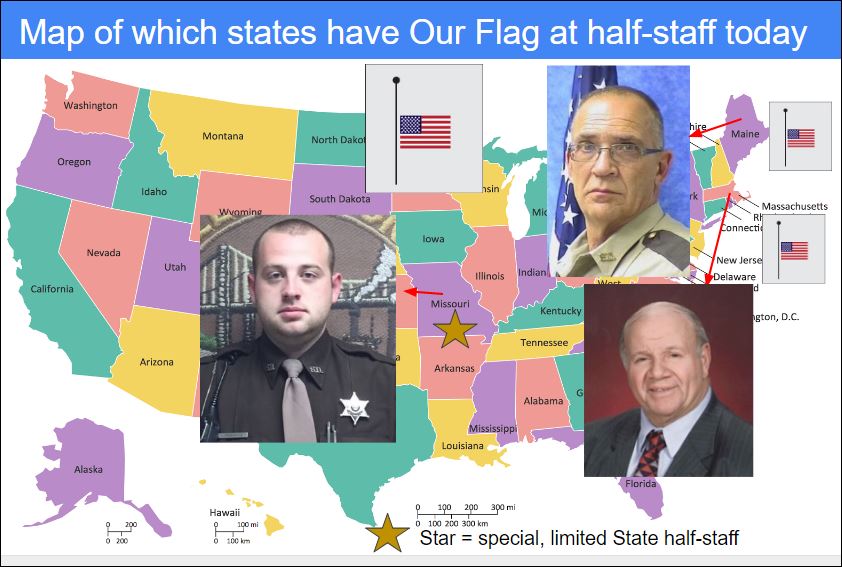 In Maine, Our Flag flies at half-staff until Friday's sunset and then again on the day of interment (TBD) as a sign of respect for the service and sacrifice of Somerset County Deputy Sheriff Corporal Eugene Cole who was killed in the line of duty on April 25th.
For Missouri, its Flags (USA and State Flag) are at half-staff, from sunrise to sunset today, across the State to honor Miller County Sheriff's Deputy Casey Shoemate, who died in the line of duty on April 20, 2018.  And, for April 26 & 27, only the Flags (USA and Missouri State Flags) in Miller County, will remain at half-staff until sunset on Friday.
In Massachusetts, Our Flag is at half-staff, until the day of interment, in honor of Massachusetts State Representative James Miceli (19th Middlesex District, MA), who passed away April 21, 2018.
​​​​​[ CLICK for more info on the half-staff honorees - courtesy of FlagNotify.com) ]​​​​​​​​​​​​
Flag Steward - Honors and Awakens Our Flag to Inform and Inspire Citizens
with this Abe Lincoln story about Our Flag 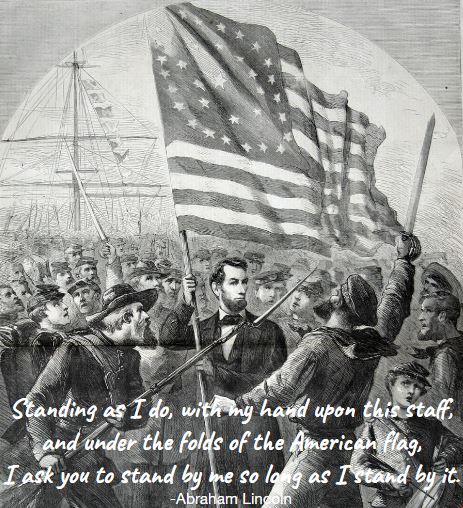 [ Image from Harper's Weekly - October in 1864 = public domain image ]
​
Many of us look up to Abe Lincoln as one of our greatest Presidents - a tough, but fair leader.  So who better to seek guidance from on how to bring unity and divisiveness with Our Flag than Mr. Lincoln.
The illustration above and poem below tell a story of how Abraham Lincoln, during one of our nation's darkest times, gathered Civil War Union soldiers and sailors to rally around the flag. At this time, America was growing weary after 4 long years of Civil War bloodshed.  Lincoln was firm with his decision to continue the war, despite the great cost of life.  He believed the causes for the Civil War were worth great sacrifice, and the end of slavery was one such cause.  This illustration and poem published in Harper's Weekly helped stir the Union to join Lincoln and rally around the American Flag.

Rally round the Flag, Boys!
Rally in your might;
Let the nations see how freemen
Can battle for the right;
Make the throbbing mountains echo
With the thunder of your tread;
With music sweet of martial feet
Salute our gallant dead.

Rally round the Flag, boys;
Rally with a cheer;
For all you love and cherish most,
For all that you hold dear,
Defend the brave old banner,
Unsullied from the earth
Within its folds enshrined it holds
All that this life is worth. 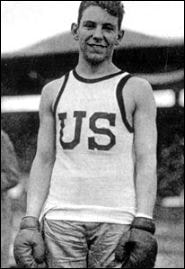 On this date, April 26, in 1897, a one-of-a-kind Olympian was born in Denver, Colorado.  Eddie Eagan is the only Olympic athlete to win gold medals at the Summer and Winter Olympics.  He won a 1920 Summer Olympic gold medal for boxing and a 1932 Winter Olympic gold medal for the 4-man bobsled.  This Olympic stud also studied law at Harvard University and the University of Oxford and reached the rank of Colonel while serving in the U.S. Army during World War II. 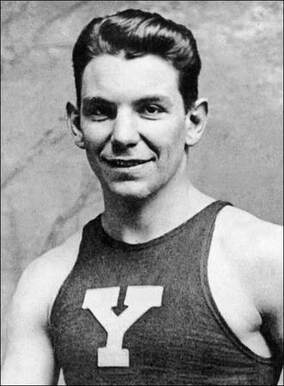 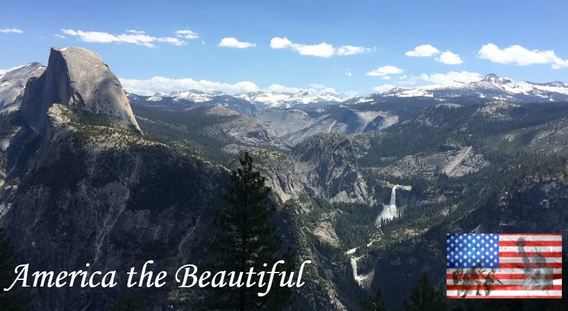