Reminders from Our Flag
for Thursday, December 14, 2017 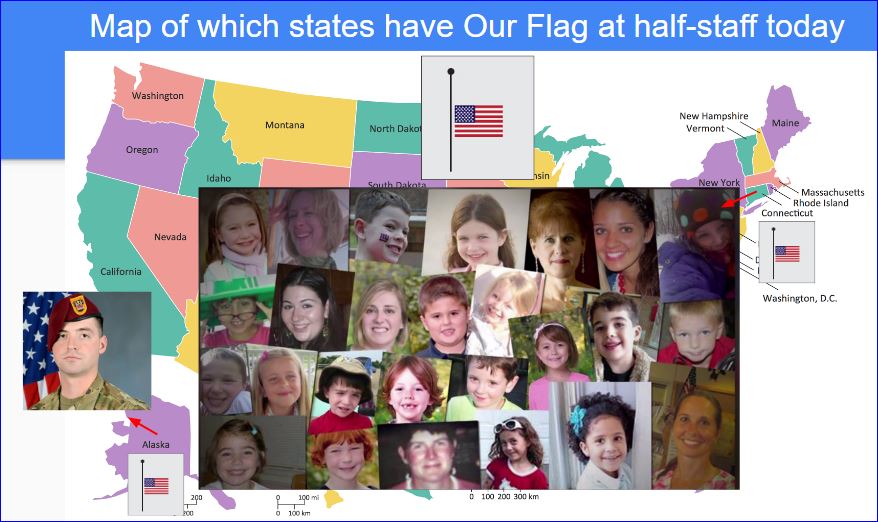 Across the USA, Our Flag flies at full staff -except in Alaska and Connecticut.  In AK, the half-staff honors U.S. Army Staff Sergeant David Brabander, 24, of Wasilla. Staff Sergeant Brabander died on December 11 while deployed in Nangarhar Province, Afghanistan, when his vehicle overturned in a combat zone. Staff Sergeant Brabander was assigned to B Company, 3rd Battalion, 509th Parachute Infantry Regiment, 25th Infantry Division, Joint Base Elmendorf-Richardson, Alaska

In Connecticut, the half-staff flags are in remembrance of the 20 children and 6 adults who were killed five years ago in the tragedy at Sandy Hook Elementary School in Newtown.  CLICK HERE to read an article highlighting the life of each shooting victim
​​[Click here to learn more about today's half-staff honorees and verify the latest flag status for every state (courtesy of FlagNotify.com)]​
​
The Beacon of Honor - Awakens Our Flag ... to Inform and Inspire Patriotic Citizens ... 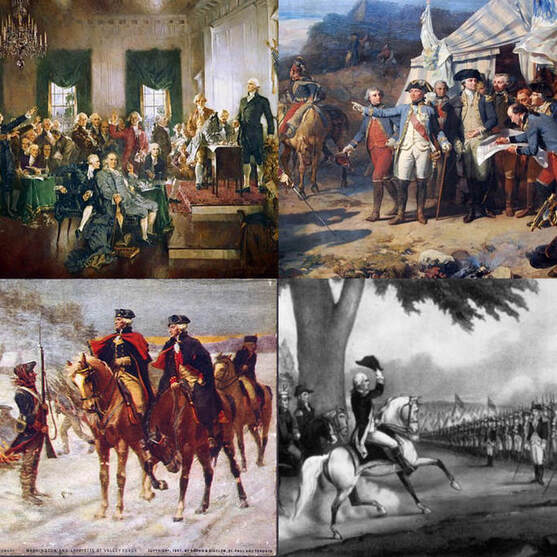 [ =public domain image ]
On this date (OTD), December 14, 1799, George Washington, at the age of 67, died at his estate in Mt. Vernon, Virginia.
So, on his memorial date, let us honor George Washington by reviewing some of his life's most significant contributions to the birth of America.  The pictures above show George Washington (going clockwise from top left):
-Presiding, over the approval of the U.S. Constitution, as President of the Constitutional Convention
-Leading the Continental Army, and working French General Rochambeau, at the Battle of Yorktown to win the final battle of the American Revolutionary War
-Taking charge, as General, of the Continental Army in 1775, and
-Checking-on troops with French General Lafayette at Valley Forge during the difficult winter of 1777-78
And, of course, he served as our first U.S. President and helped establish the way our government branches would work together to lead our young country - by following and putting in to practice the the U.S. Constitution.

Let us thank George Washington for all he did to establish our great country and pray that we live up to and finally meet his expectations that we become a country which is truly 'indivisible, with liberty and justice for all.' 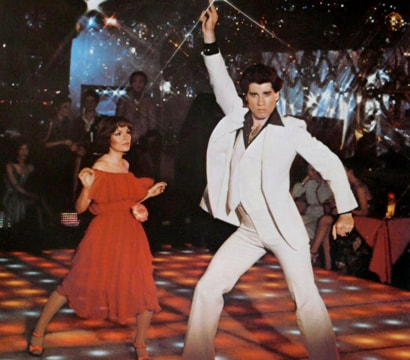 [ = fair use - educational pic ]
​that ... OTD in 1977, the movie Saturday Night Fever, which showcased the disco music era at its peak, opened in theaters.
​
#########################​
Thanks for reviewing today's 'Reminders for Our Flag'
- a service from the Beacon of Honor - Awakens Our Flag program
Now, go be a good citizen!!!​
​Content Sources & Credits:
Sources:  Click here to see our Sources for content research
​Credits:  Unless otherwise noted here, photos displayed each day are public domain images, pictures by Sean Sweeney, or used by permission.