Our Flag's Daily Briefing
for Sunday, October 8, 2017
The Beacon of Honor - Awakens Our Flag ... to Inform and Inspire Citizens ...
TODAY'S FLAG STATUS: 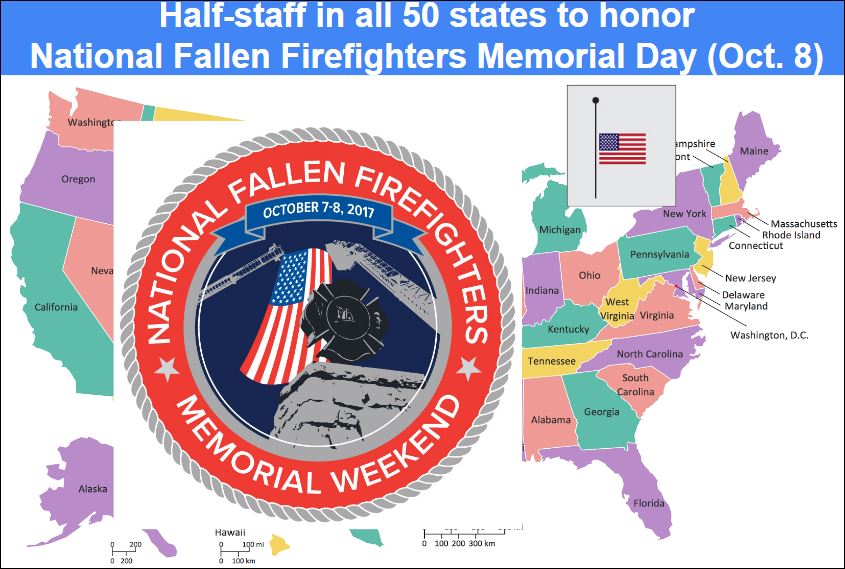 [ public domain image ]
The National Fallen Firefighters Memorial in Maryland.
Constructed in 1981, the 7-foot stone monument features a sculpted Maltese Cross, the traditional symbol of the fire service. An engraved plaque on the monument bears a message from President Ronald W. Reagan. At the base of the monument an eternal flame symbolizes the spirit of all firefighters — past, present and future. Plaques encircling the monument list the names of the men and women of the fire service who have died in service to their communities since 1981. Whenever a firefighter dies in the line-of-duty, fire officials post a notice of the death at the monument and lower flags at the site to half-staff.
Each year, America honors its fallen fire heroes during a National Memorial Service at the monument site. The ceremony includes the placing of a Presidential Wreath at the monument and dedication of a plaque honoring those who died in the line-of-duty during the previous year.

CLICK HERE to read the rest of this info provided by the FireHero.org website and see some of this memorial day's activities LIVE.
​[If you are using this page as part of your flag ceremony and you WANT TO GO BACK TO 'TODAY'S FLAG CEREMONY' NOW.
​Then, CLICK HERE to return.]
​
​TODAY'S FALLEN FIRST RESPONDERS' COMMEMORATION
is dedicated to more than 7,400 IAFF fire fighters who have died while in the line of duty: 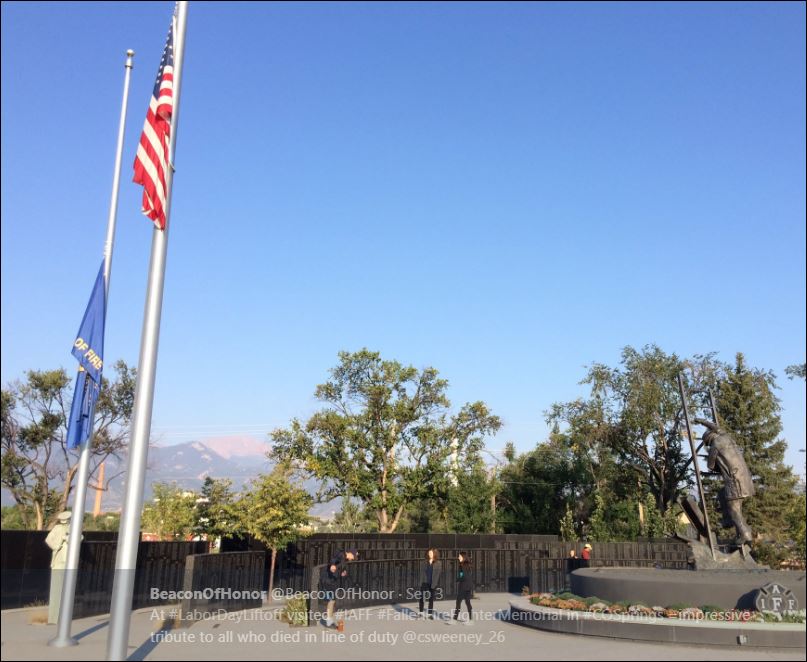 At Memorial Park, in Colorado Springs, Colorado, just a few blocks away from the U.S. Olympic Training Centers, is the IAFF (International Association of Fire Fighters) Fallen Fire Fighters Memorial.
In 1986, the IAFF completed a permanent tribute to its members, the IAFF Fallen Fire Fighter Memorial, located in Colorado Springs, Colorado. The Memorial was founded to recognize and honor past and future professional fire fighters and emergency medical personnel who are killed in the line of duty and to provide assistance to the surviving spouses and children of those members.
The centerpiece of the Fallen Fire Fighter Memorial is a bronze likeness of a fire fighter descending a ladder while cradling an infant in one arm. Towering 20 feet above the park’s surface, “Somewhere, Everyday” epitomizes the courage and bravery displayed daily by professional fire fighters across the continent. In July of 1988, the IAFF registered with the State of Colorado as a Nonprofit Corporation and in August of 1988 received a Park License Agreement for Memorial Park. In 1989, the IAFF erected the first of two granite walls to bear the names of fallen IAFF members. The names of brothers and sisters killed in the line of duty have been etched there since. Although thousands have died throughout our union’s history, the names on these walls date back only through 1976, when the U.S. federal government first began tracking line-of-duty deaths in the fire service.
More than 7,400 names of fallen IAFF members are etched on the "Honor Wall" of this memorial.​
We honor and thank all these fallen firefighters who put their lives on the line to save others.
GO HERE to visit the IAFF Fallen Fire Fighter Memorial website
[If you have not already gone back, now is the time to GO BACK TO 'TODAY'S FLAG CEREMONY'.
​CLICK HERE to return.]