Our Flag's Daily Briefing
for Tuesday, September 5, 2017
The Beacon of Honor - Awakens Our Flag ... to Inform and Inspire Citizens ...
TODAY'S FLAG STATUS: 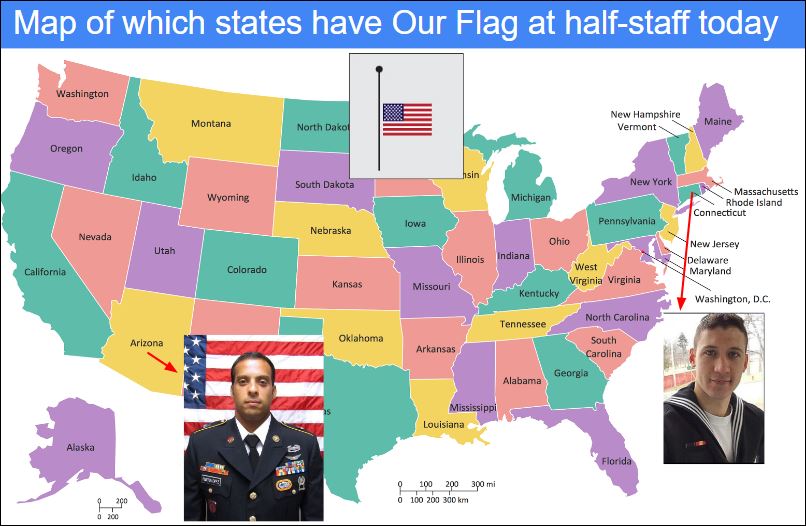 Across the USA, Our Flag flies at full staff, except in Connecticut and Arizona.  In Connecticut, Our Flag is at half-staff to commemorate U.S. Navy Electronics Technician 3rd Class Dustin Louis Doyon who died in the USS McCain ship collision.  The half-staff in Arizona honors US Army Staff Sergeant Emil Rivera-Lopez who died in a helicopter crash off the coast of Yemen.  He was serving as part of OIF (Operation Iraqi Freedom).

​​[Click here to learn more about today's half-staff honorees and verify the latest flag status for every state (courtesy of FlagNotify.com)]​
​​​
​​[If you are using this page as part of your flag ceremony and you WANT TO GO BACK TO 'TODAY'S FLAG CEREMONY' NOW.
​Then, CLICK HERE to return.]
​​
​​
​TODAY'S REMINDER FROM OUR FLAG:
... forming a more perfect Union ... 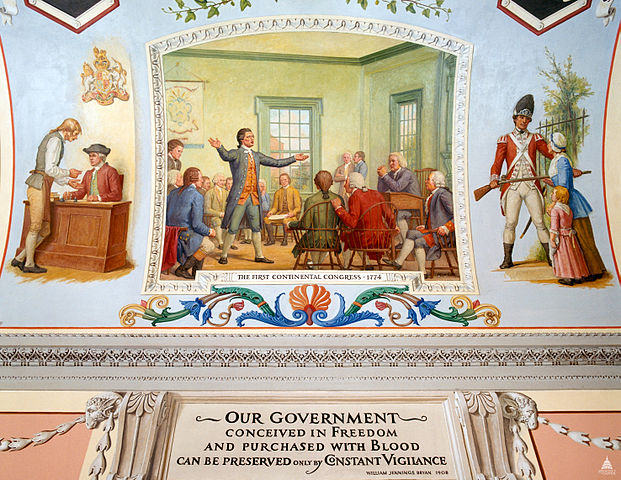 Painting in Capitol building depicting First Continental Congress meeting [public domain image]
The First Continental Congress was a meeting of delegates from 12 of the 13 colonies.  They met from September 5 to October 26, 1774 in Philadelphia, Pennsylvania.  The delegates gathered together to ask King George III of Britain not to punish Massachusetts, and all the colonies indirectly, for the Boston  Tea Party.  They also started to make plans for a full revolt, by having each colony set-up and train its own army (militia), if the king and the British parliament rejected the colonies' plea to not be punished.  King George III and the British ignored the colonies' petition and enforced the "Intolerable Acts" against Massachusetts.  And, so began, the path to the Revolutionary War between Britain and the colonies starting in 1775. 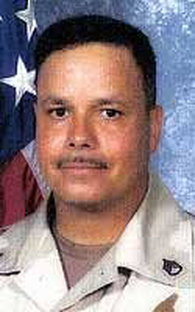 Army Staff Sgt. Gary A. Vaillant
​Died September 5, 2004 Serving During Operation Iraqi Freedom
Staff Sergeant Gary Vaillant, 41, of Trujillo, Puerto Rico; assigned to the 2nd Battalion, 72nd Armor, Camp Casey, Korea;
killed Sept. 5 when his tank ran over an improvised explosive device in Khalidiya, Iraq.
​
[summary courtesy of Military Times' Honor the Fallen website]
​​
We honor and thank Gary Vaillant for defending our freedoms and fighting to liberate the lives of others.
Go to this Military Times 'Honor the Fallen' article to honor him and learn about his life and family

[If you have not already gone back, now is the time to GO BACK TO 'TODAY'S FLAG CEREMONY'.
​CLICK HERE to return.]
​[Serving up a slice of Americana
... justice prevailed even in the Wild West ...] 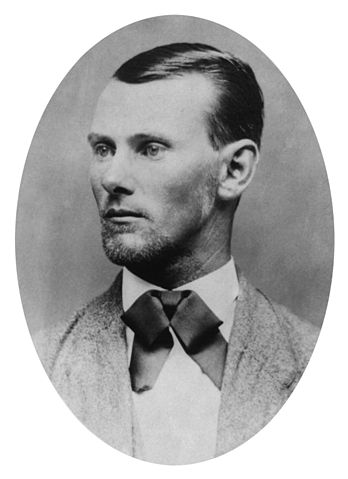 Jesse James around 1882 [public domain image]
[On this date in 1847, Wild West legend Jesse James was born in Centerville, Missouri. Following the American Civil War, Jesse and his brother Frank formed a group of outlaws, robbing banks, trains, stagecoaches and stores. In 1882, after the governor of Missouri offered a $10,000 reward for their capture dead or alive.  A member of the gang shot 34-year-old Jesse in the back of the head and claimed the reward.]