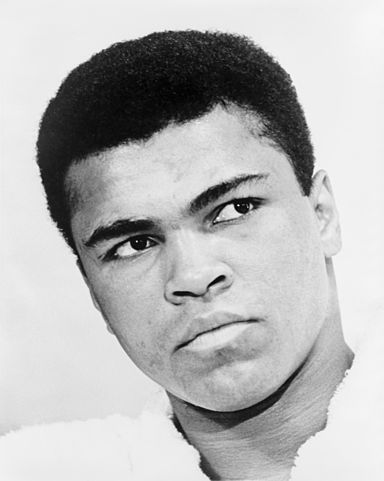 Muhammad Ali in 1967 (public domain image)
​​
​During the Vietnam War, this week had historic significance in 1967.  In 1967, Muhammad Ali was stripped of his world heavyweight boxing title because he refused to accept his draft into the U.S. Army.  It took 4 years to assure his right to be a conscientious objector to the Vietnam War.  In 1971, the U.S. Supreme Court, overturned the lower court ruling of Ali’ draft evasion and restored his boxing title.  Ali’s actions made him an anti-war activist icon during this time.
​ 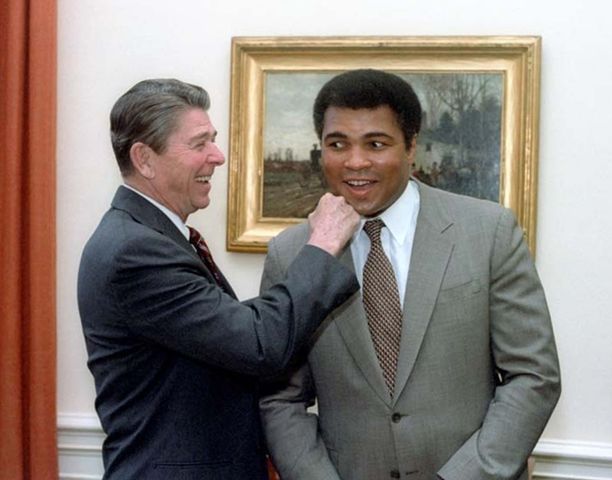 Muhammad Ali with President Ronald Reagan in 1983 (public domain image)
Why does this matter today?​
The Vietnam War was the last time that America had to turn to the draft (aka Selective Service System) to fill its military ranks for war.  Despite the high deployment rate and shortage of active duty military personnel during the current Global War on Terrorism, the use of military reserve and National Guard units and good number of patriotic American volunteers has kept America from needing to force military service with the draft.

EVERY FRIDAY ... Compete against your classmates, for a weekly $10 gift certificate prize, as you race to answer questions related to this week's Beacon of Honor - Awakens Our Flag content.  Each week's 10 question quiz will contain 8 'Flanigan's U.S. Historical Moment to Remember' questions and 2 Beacon of Honor general content questions from its daily features, flag status reports, fallen soldier alerts, and more.