[ Header / top pic by SSweeney of small US Flag posted on fenceline with Highlands Ranch ranch in background and Longs Peak in distance = taken Nov. 2020 ]
[ Citizens read on ... while students can perform and/or listen to their teacher read the daily 'Half-Staff alerts and Pre-Pledge Tribute' text below in RED ]
Welcome to today's Half-Staff Alerts and Pre-Pledge Tribute for Wednesday, December 7th.
There is National Half-Staff order for Pearl Harbor Remembrance Day. 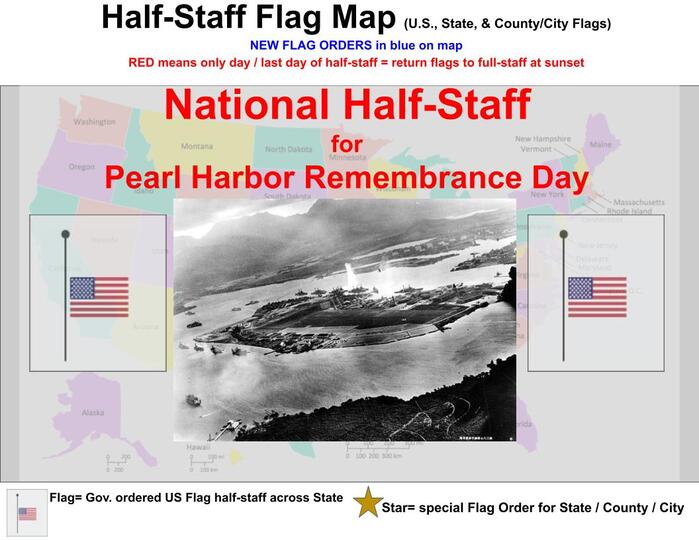 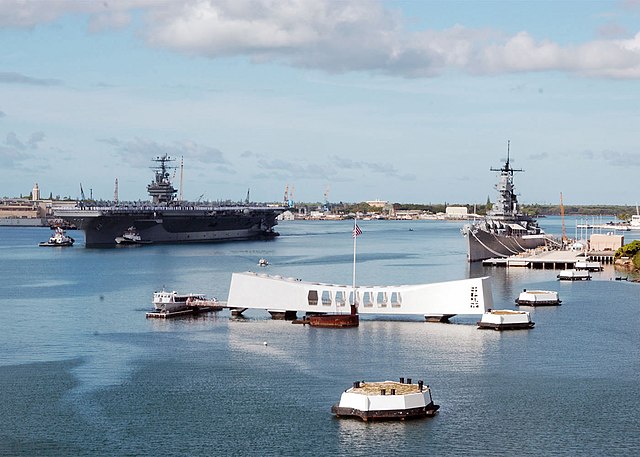 [ public domain image ]
Pearl Harbor Remembrance Day!
On this date, December 7th of 1941, ... "a date which will live in infamy" ..., the Japanese attacked Pearl Harbor, America's premier naval base in the Pacific, on the Hawaiian Island of Oahu.  The Japanese attack on Pearl Harbor damaged or destroyed nearly 20 American naval ships, over 300 aircraft, and killed more 2,300 military service members and civilians.  This invasion brought America into World War II, a war in which more than 16 million Americans served in the armed forces and approximately 405,000 died.
And, now it's time to say the Pledge of Allegiance.
Students across the USA, please, join each other in reciting the Pledge of Allegiance. 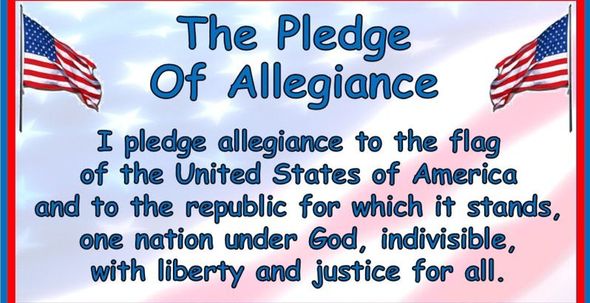 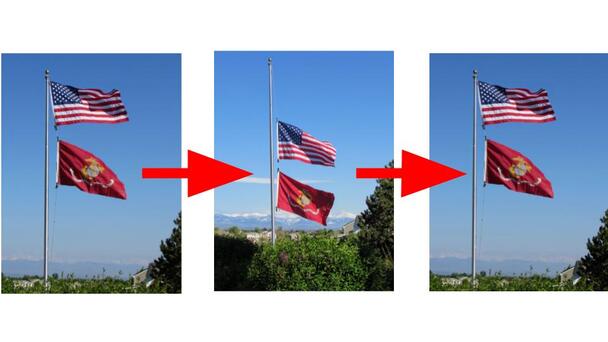 GO / CLICK HERE
to get a one-time, LIFETIME subscription for NATIONAL and STATE-TARGETED Half-Staff & Back-to-Full-Staff TEXT ALERTS (just $5 tax-deductible donation).
Half-Staff Alerts & Honorees for December 7
​*** Reminder: The Flag orders, by government officials (President, Governor, etc.) are for flags at government facilities within that official's jurisdiction. Citizens are encouraged, but not required to follow the orders.

National Half-Staff for National Pearl Harbor Remembrance Day (Dec. 7)
The U.S. Flag is HALF-STAFF across the USA and its territories in observance of National Pearl Harbor Remembrance Day (Dec. 7) honoring the 2,403 military service members and civilians who lost their lives during the attack on Pearl Harbor - leading to the U.S. entering World War II and America's Greatest Generation fighting to maintain freedom at home and abroad.
​
​Upcoming Half-Staffs
GO CLICK HERE to see the completed National and State Half-Staff Orders for 2022
​​​​Half-Staff Flag Etiquette (Procedures):
Flag-raising at sunrise = hoist the Flags to full staff, then lower slowly, respectfully to half-staff
Flag-lowering at sunset = hoist Flags up from half-staff back to full-staff, then lower slowly, respectfully all the way down for removal
​Stars & Stripes Flag Etiquette: 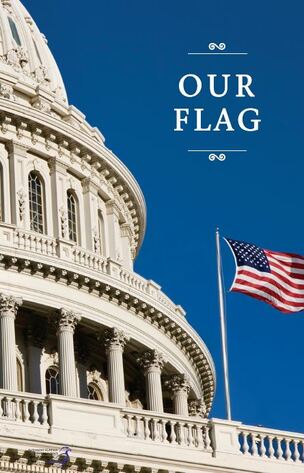